The importance of monitoring the weather conditions in the farmed environment is clear when we see the need of small and medium producers have access to climatological data of its properties to make decisions that cause losses or which may result in gains or avoid losses. One example is the use of pesticides. Producers who do not have the monitoring of climate system and perform the application of fungicides even when (s) rain (s) did not reach the precipitation amount where the application is recommended, causing an unnecessary expense for the lack of information. Another example is the probability of frost in fruit, which can cause a significant loss in production, when the frost is not monitored and the producer does not know whether to turn on water sprinklers, or it may occur to be wasting this resource. In addition the station can issue an emergency alert where the producer knows it is susceptible to an adverse condition, having time for decision making. Yet this reality is far from small producers because of the cost of weather stations, available. Thus, this project sought to address this market gap, enabling small farmers an opportunity to monitor the climatic conditions in their farms. This work shows the development of a weather station that can be used by small and medium farmers, installed in remote locations with radio communication, fueled by batteries, and uses photovoltaic modules to recharge them. The station has sensors for various physical quantities. Innovations in the project are the algorithm used for controlling electronic circuit and interpretation of meteorological data algorithms. This circuit was developed to the low power consumption to provide energy-efficient equipment, reducing the need to recharge the batteries, which is a stable system even when it is subjected to regions where they can spend a month cloudy without a recharge. The project development method was validated in an industrial environment, to solve other needs that were similar to the weather station. Assuming similarity developments of the method was tested and the results obtained were satisfactory, which proved the effectiveness of the studied method. Also positive were the results of the prototype of the weather station where it showed efficiency to capture the data needed for decision-making of farmers and makes them available in an easily accessible interface. The prototype can already be used for minimum temperature alerts to predict the risk of frosts, as well as to determine the correct time connection of irrigation systems due to soil moisture monitoring. 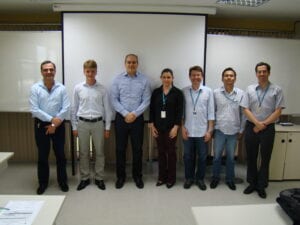