Among the disturbances that can affect the power quality, there are harmonic distortions. This situation, which is known to produce unwanted effects, such as wiring overheating, caused by the skin effect, erroneous actuation of the protection system, changes in the peak value, resonance, vibrations, increase of voltage drop and exasperation of neutral-earth voltage. There are no big issues in the measurement of these effects since it is possible to measure not only these parameters but also to indicate a possible flow of their predominance when measuring at a common coupling point between a particular consumer and the utility. However, despite several publications concerning the subject, there is still no method that can be considered assertive in the segregation of responsibility percentage for each harmonic distortion found. Nevertheless, the increasingly prominent need for a clear technical and regulatory role, since it is possible to impute responsibility for the transfer of the sources of the disorder. This paper gives a general overview about main existing methodologies that have proposed to overcome the problem, making a comparison among them. Based on this, one of these, called method of capacitive unit switching, was selected for a laboratory environment experimental validation, since the scope of the reference was limited to the computational simulations scope. The arrangement is developed using equipment and devices commonly found in industrial facilities, since a practical application for one of the premises for the method selection. With an application of the proposed equation, it becomes possible obtain the harmonic impedance of the load, thus allowing possible the application of the superposition theorem, in the same way proposed by reference paper. As results, reproduce in a laboratory environment an arrangement similar to the computational simulation, detailing the criteria and characteristics for the elaboration of the same, demonstrating the feasibility of such proposal. It corroborates the premises established by the reference method, through indicators and comparative data, and finally presents a viability of application of the method in determining the proportions of responsibility for a case of harmonic distortion involving two agents, discussing their results. 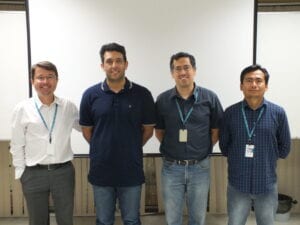