For the expansion of the transmission lines (TL), the concessionaires of the electric sector in Brazil plan to build, in the next years, new routes that cross urban and rural areas. Given the enormous territorial extension involved in these facilities, the diversity of land involved in the foundations of support structures will be significant. The nature of the lithotypes and soils that characterize the lands, generate difficulties during the process of execution of the foundations for the TL implantation, mainly regarding the definition of the type of excavation. Currently, in the occurrence of rock, explosive materials are usually used for total and/or partial fragmentation to open the trenches. As this process produces vibrations and release of material that can damage buildings in the surroundings. In this context, this research involved the comparison of the use of conventional explosives and the fragmentation technology by the injection of expansive mortar (EM) as an alternative to rock removal. The methods have been studied and tested in the laboratory and in an open-pit mining located in the city of Colombo (PR). From the tests performed in this open-pit mining it was shown that the use of the conventional method of blasting rock fragmentation is effective and can be performed without fragments releases. In this test, the depth and diameter determined for the trench opening for TL implantation were reached, according to the detonation arrangement made in the form of tunnel opening pestle. However, the use of explosives proved to be a complex activity, with a high degree of technical and operational knowledge and demanding an acquisition of army licenses for operation and execution by a specialized team. The use of mortar, once followed the recommendations of the manufacturers, has presented advantages in relation to the explosives, since it does not require specialized equipment, licenses for handling and transportation, is easy to acquire and transport, besides being a demolishing agent based in hydration reactions, generating tensions up to 8000 t / m2. However, EM did not prove to be effective as a rock dump, due to the strong temperature variation at the time of the tests in the dredge, as well as the geotechnical characteristics of the rock, which presented a high degree of fracturing. The rock fracture, in turn, prevented the retention of MD in the holes, and dissipated the energy, preventing generation the tensions necessary for rupture. For the laboratory tests, three samples were produced from a rock block extracted from the open-pit mine, which were drilled in the center for later injection of expansive mortar. In these samples, three sensors were installed, and the fragmentation was monitored with reaction time of two hours for the complete dismantling. However, the present study does not aim to discuss a new guideline for the application of expansive mortar, but to identify its efficacy in trenching for the implementation of transmission lines. On the other hand, there was noted that in the laboratory, under controlled conditions, MD had its fragmentation action proven. 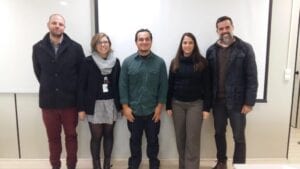 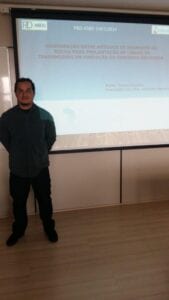